How Indiana's religious freedom bill came to be - A theory

I've seen a great deal about this in the past few hours. Mostly talking about the evil, malicious nature of the law, and praise for the various organizations who are aiming financial punishment at the state for their participation in this act of discrimination.

It took a fair amount of hunting to find the actual text of the law, here.

It is true legalese, Mind numbing, vague, sterile... But after a few reads through, I really didn't see the malice or intent to discriminate that the opinion-sters are buzzing about. It looks more like they are trying to protect against discrimination against religious groups to me, such as the well-worn photographer case. (Just a thought, since photography is a form of personal expression, arguably, falling under free speech - that was the argument Larry Flint made and won years ago - Isn't compelling someone to photograph something they don't believe in, in essence a violation of their right to free speech?)

Last night an alternate theory came to me, as to how this all went down. Let me start by establishing the straight-gay continuum. The distribution numbers are purely guesses, but I expect this is approximately what the population distribution looks like. 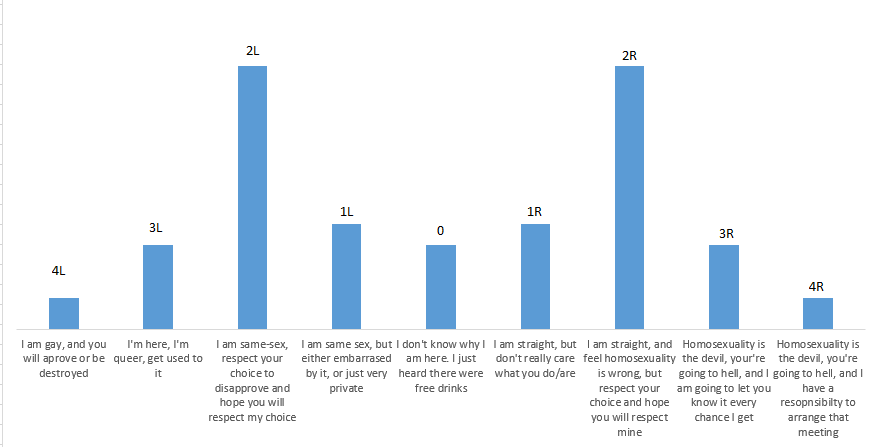 Now, 4L and 4R, though the smallest groups, are the ones who get the most attention; make the most noise. If you hear something in the news, it is most likely coming from 4L, 3L, 3R or 4R.


Now I won't speculate as to how it all really began, that is lost somewhere in the past, and the fallibility of human memory virtually guarantees it isn't coming to light. But more recently, I suspect someone in 4L did something to irritate 4R - most probably launched an attack against a 2R. so 4R, and probably some 3R went storming off to the legislature to do something about it. I imagine 2R got involved as well, as they were the group who got attacked.

2R then produced a general idea for a law that would provide protection. 4R wasn't happy with it, and tried to push the law to be more aggressive in nature. 2R favored something more precise, less vague, but as 3R pointed out, 4L would not be happy with the law regardless, and would actively seek to invalidate the law. 2R conceded and thus relented to requests for greater vagary as a proactive defense against these inevitable attacks.

And thus the baby was born, with plenty of crying, screaming and pooping to go around.

I believe this model fits rather well, conforms to the wisdom of Hanlan's razor, and likely fits just as well with most every controversial bit of legislation.

A few other points it brings out:

Email ThisBlogThis!Share to TwitterShare to FacebookShare to Pinterest
Labels: politics

I spent two post laying ground work, so let me get to my point, Many fo the groups who are out and about defending constitutional rights.... are doing it wrong.

Here is one very good example. Warning, it is long, and somewhere after about 5 min he throws out a fair amount of profanity. Sixty seconds is really enough to get the point.

Here's one more, from the same 2nd amendment theme.


And one last one of a different nature (Don't wast your time after about 2:00. Very boring and pointless). Yes, I realize I am talking about the constitution and showing a clip form another country. Don't get lost in the minutiae.


The point, imbeciles like this run around "defending our rights" by thumbing their noses, being confrontational, and demanding that our rights be protected. They seem to lack understanding that those rights can be revoked. There is nothing so sacred about the 2nd amendment that it could never be removed.

Instead of investing so much effort in schooling authorities on "The law", their time would be better served in teaching responsible use of said freedoms. Yes you have a right to open carry a firearm. But spend enough time flashing your gun just for the sake of proving your right, and you may very well find that right taken away. And you can then be as belligerent as you want about the loss of freedom, about the Countries descent into fascism, into police state-ism, but it will still be your fault.

The U.S. Declaration of Independence talks about "Inalienable human rights", among which are "Life, Liberty and the Pursuit of Happiness", and establishes "The Government"'s purpose as that of protecting those rights.

The Constitution and Bill of Rights were formulated around that idea, and enumerated some freedoms deemed necessary, consequent to, or otherwise inherent in those inalienable human rights.

Those documents -ultimately are just documents, written by men. Based on their feelings/opinions/inspiration. They are therefore subject to change - and have changed over time. (18th amendment is a good example).

And irrespective of those documents, what rights do we have which are truly inalienable? i.e. Natural, cannot be taken away?

Life? That is taken away all to often, for any number of valid or invalid reasons.

Liberty?  Plenty of people are robbed of this.There are still an estimated 20-30 million slaves in the world today.

Pursuit of happiness? That one might stand. You are free to pursue it, assuming that you recognize happiness as a personal state of mind, not dependent upon the behavior of others, or the accumulation of things.

Freedom of speech can be curtailed.  Freedom of religion can be drastically restricted. Firearms and property can be confiscated. Laws can be changed. And as technology progresses, there may be a day when even Freedom of thought could be intruded upon.

Much of human freedom in the crowd setting is - a social construct. We are what we as a group decide we are. We have the "freedoms" we decide to give.

Does this all make sense? Have a made a logical error anywhere?
Posted by r-pentomino at 12:57 PM 0 comments

Email ThisBlogThis!Share to TwitterShare to FacebookShare to Pinterest
Labels: politics

Imagine that you and three of your best friends have gone together to purchase a $300,000+ Lamborghini Aventador. 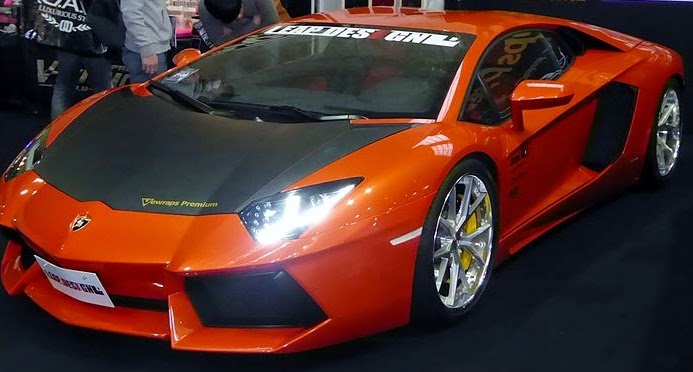 Everyone gets a day on a rotating schedule. One evening, you are out with the friend whose day it is. You had gone separate ways briefly to run a few errands. You are back at the car, waiting - just as the sun is beginning to set. Your friend shows up, staggering slightly and it becomes quite obvious that your friend is fairly inebriated, and thoroughly impaired. You offer to drive but your friend insists it is his day, and he is going to drive.

Now assume that your drive home follows a narrow, winding road with an abundance of very steep drop-offs. Are you going to stay in the car with your friend? You have a considerable investment in it after all. Furthermore, you realize that the drive home is going to take you right through a large park, which this particular evening is hosting the state championship kick-the can tournament. It is therefore  going to be literally crawling with hordes of youngsters in dark clothing, paying scant attention to traffic.

Bad planning on the part of city officials aside, is it fair to say that there are certain times and certain circumstances when it is appropriate, even necessary to restrict the freedoms of certain individuals? In the interest of the freedoms of other individuals?